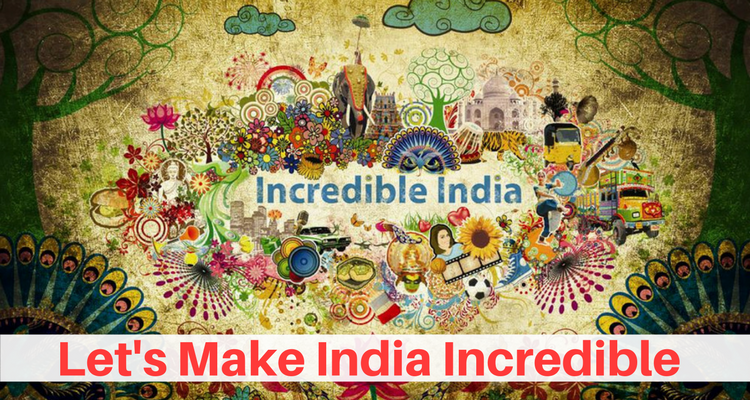 “Be the change you want to see in the world.” – Mahatma Gandhi

What is patriotism to you?

Is it standing in attention position on national anthem or wearing a white kurta on Republic Day?

Well! There is one more type of patriotism we usually forget. Keeping our country like we keep our houses.

Do you like living in a dirty house where there is garbage here and there. No Right? Then why the same rules do not apply to your country.

Our country gives us an identity at the first place. As we grow up, it gives us opportunities to succeed in life and what do we give it in return.

Oh yes, you guessed it right. We give it tons and tons of litter. We conveniently throw garbage around.

But God forbid, we even throw an inch of paper when we are in the foreign country. I mean, i am intrigued and eager to understand, how the human mind works. When something is wrong in one country, it is wrong throughout.

Doing my bit in making my country beautiful, i would like you to make a checklist and follow it every single day of your life.

“Be the change you want to see in the world.”

When we go to another country, we don’t litter because the roads are clean, the dustbins are in place.

I won’t blame you entirely. There are situations when there is no dustbin around and you need to make an extra effort. All i would say is that yes it is taking more effort now, but eventually, your efforts would be recognised and you would be noticed by dozens of people who will be further noticed by dozens thus creating an awareness chain reaction.

Have you seen “Lage Raho Munna Bhai.” Of course, you have. The movie sent a powerful message to people.

A very simple message, that pinpoint the person who is doing wrong. One day, he will stop doing it.

If you see anyone littering on the road. Do not hesitate. Go over to him/her and say that this is not right and he/she should immediately pick it up and throw it in dustbin.

If that does not work, then Gandhigiri comes into play. Throw it yourself. He/she will definitely get embarrassed and that would be a long term solution.

Other small things you can do on a personal level. Attach a small dustbin at the backseat of your car. It will prevent the littering on roads. Whenever you travel by bus, suggest the driver and conductor to have a mini dustbin.

They would ignore many times in the beginning but then eventually the effect would be visible.

Thirdly, always carry a small bag with you in which you can throw your garbage. You can always dump it wherever you find a dustbin.

All these steps seem like what change could they will have in the longer run. You won’t even believe if every person would start following certain rules at his/her own level, how much could we grow in an year’s time. Clean roads would mean a beautiful country which further means more tourism.

People would want to visit our place and settle here. Rules are sometimes better and they are best when we set them for ourselves.

So let us set the rules and start giving our bit to the Government’s Swachh Bharat Abhiyan.